Cable troughs are mainly laid alongside railway tracks, and carry and protect all kinds of cables, for communications, signals, and electrical power distribution and transmission.
The Green Trough cable trough developed by Furukawa Electric is environmentally friendly, being made from recycled plastics, is extremely light at only one quarter of the weight of the conventional concrete troughs, and lightens the burden on construction workers and significantly reduces construction time.
Also, it is resistant to corrosion and salt damage and has superior durability, making it suitable for use in many locations, such as along coastal areas, etc. It can be used in a variety of fields other than railways, such as roads and electrical power. 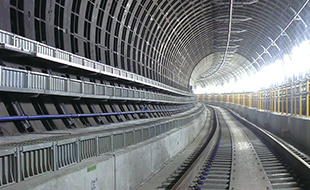 You may request a product catalog or contact us below.