FC/NFOEC 2013, Booth #2627, Anaheim, California, March 18, 2013 - Furukawa Electric Co., Ltd. has developed and started mass production of the FOL 1437 series of 14xxnm pump source lasers with high output and low power consumption in the 1420nm - 1460nm range. These are key devices for use in Raman amplifiers, demand for which is expected to increase as the telecommunications industry accelerates adoption of ultrahigh-speed communications at 100 gigabits per second (Gb/s). By designing in the FOL 1437 pump source laser product line, Raman amplifier(note 1) manufacturers can immediately benefit from high output power along with low power consumption, a combination required to deploy next generation network infrastructure while helping to reduce operating costs. The FOL 1437 series consumes 20% less electric power than currently available conventional products.

Presently, global network traffic continues to grow at a phenomenal rate in both terrestrial and wireless networks. With the smartphone becoming a ubiquitous tool for both consumers and business users, data traffic from a number of applications has spurred rapid expansion of wireless backbones to backhaul mobile network traffic. Other telecom growth factors also include acceptance and growth of cloud computing, data center connectivity, mass video distribution to smart devices and social networking. It is now paramount to address increasing network traffic, first to sustain and second to invest in evolving the network infrastructure. Therefore, optical amplifiers will continue to be a critical workhorse in present-day as well as future networks.

Noise performance is a key parameter for ultrahigh-speed optical transmission at 100Gb/s, a form of transmission that is expected to be introduced increasingly in the future. Generally Raman amplifier is expected as an effective solution with excellent noise characteristics. In Raman amplifiers, a 14xxnm-range laser is used as a pump source. This now requires a shift to higher output combined with lower power consumption with the aim of continued performance improvement. For these applications, Furukawa Electric developed the FOL 1437 pump source laser series. In addition, Furukawa Electric's pursuit of higher performance, manufacturing strengths and excellent product quality are other benefits of using this product line in Raman amplifier designs.

The technologies developed in the FOL 1437 series can be extended to other applications, such as pump source lasers for EDFA(note 2). Mass production will commence in the first half of fiscal 2013.

The new product will be exhibited at OFC/NFOEC 2013, scheduled to be held from March 19 in Anaheim, California, United States. 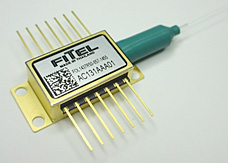 (note 1)Raman amplifiers - When a pump light is injected into the fiber, Raman scattering occurs within a wavelength range that is nearly 100 nanometers longer than the wavelength of the pump light. When a signal light exists in the scattered-light area, stimulated emission occurs and multiplies the light. This can be used as an amplifier. Raman amplifiers are inferior to EDFA in terms of excitation efficiency. However, their band frequency is broad and can be increased within an arbitrary wavelength range.

(note 2)EDFA - Erbium Doped Fiber Amplifier. EDFA is a type of optical amplifier, characterized by the addition of erbium to the core of optical fiber. It is often used in wavelength division multiplex (WDM) systems. With a pump light ranging from 980 nanometers to 1480 nanometers, EDFA is capable of increasing the wavelength to near 1550 nanometers.

OFS is a world-leading designer, manufacturer and provider of optical fiber, optical fiber cable, FTTX, optical connectivity and specialty photonics products. Our marketing, manufacturing and research divisions listen to customers and work together to provide innovative products and solutions that traverse many different applications as they link people and machines worldwide. Between continents, between cities, around neighborhoods, and into homes and businesses of digital consumers we provide the right optical fiber, optical cable and components for efficient, cost-effective transmission.