The ECCOFLOW SFCL was designed, built and tested by a team of fifteen European organizations that include five European utility companies. The device is currently being installed in the Endesa utility grid in Palma, where frequent lightning storms in the fall months are expected to allow the device to fully demonstrate its capability to protect the grid against short circuits. Endesa is one of the largest electric power companies in the world and is Spain’s largest utility.

In Mallorca and other areas of the world, the increase of renewable, decentralized electric power generation often pushes distribution networks to the limits of the short-circuit current capability. In order to meet higher requirements, network operators can either expand the networks or deploy superconducting fault current limiters to enhance the grids’ short-circuit strength.

“Wire requirements for the ECCOFLOW limiter were extremely challenging as this is the first SFCL design to match a wide range of grid environments and functional demands in one device,” said Yusei Shirasaka, president of SuperPower. “SuperPower’s unique SFCL wire that is specifically focused on the requirements for FCL functionality – a highly resistive substrate, flexibility in wire stabilization options, and very tight current uniformity – was meticulously tested and evaluated and found to be the only wire capable of meeting all of the device requirements. In fact, the high performance level of the wire supplied allowed a reduction in the amount of wire needed for the device to operate as designed.” The wire was supplied in 2012 to Nexans SuperConductors GmbH of Huerth, Germany for incorporation into the SFCL device modules.

Resistive superconducting fault current limiters are essentially “invisible” in normal operation. In this state, the superconductor material shows practically no electric resistance at temperatures of about 77 Kelvin (-320 °F). Critical currents exceeding the nominal level, however, will cause the material to instantly build up high electric resistance. This current limiting function is a result of the material’s physical properties only. As a consequence, the superconducting fault current limiter does not require detection and resets automatically.

The device was designed and built by Nexans and shipped for type testing in late 2012. Once installation is complete, it is scheduled for six months of operation in an Endesa substation in Palma de Mallorca and will then be moved to the Východoslovenská Energetika network in Košice, Slovakia for a further period of operation and testing.

Traute Lehner, senior director of marketing and government affairs of SuperPower, who attended the workshop, said, “SuperPower provides its 2G HTS wire for a wide variety of device applications. Progress in the development of superconducting FCLs and their installation into real grid applications, especially in Europe, has been very encouraging. We are pleased that our wire was selected for this important collaborative project and look forward to continuing to supply HTS wire to the FCL market as these real world installations continue.” 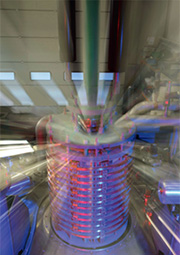