The Yokohama Works of Furukawa Electric Co., Ltd. has been awarded the Kanagawa Global Environment Award 2012 Energy Saving Prize for its achievements in global environmental conservation.

Under its energy-saving plan to deal with the power shortage after the Great East Japan Earthquake, the Yokohama Works managed to reduce its maximum operating power (contract power) from 1,096 kW to 850 kW during the summer by visualizing power consumption in real time and reducing peak power consumption through the effective use of thermal storage tanks. The Works was awarded the Energy Saving Prize for this extraordinary achievement. The Kanagawa Prefectural Government held the awards ceremony on February 4. Takeo Shimizu, the Director of the Yokohama Works, received a certificate of merit and a plaque from the Governor of Kanagawa Prefecture, Yuji Kuroiwa.

The Yokohama Works will continue to conserve energy by effectively using the thermal storage tanks that were installed last year. 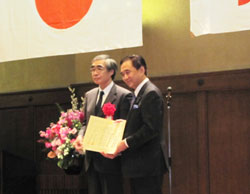