In April 2008, the Group launched its BCM activities for the purpose of preparing for risks such as major earthquakes to minimize the impact of business interruption and make an early recovery from such a disaster. In July 2010, a companywide committee was organized to promote BCM activities across all operations. In January 2011, the Group achieved BS25999 certification, the then de facto international standard for BCMS that was established in Britain.

In the Great East Japan Earthquake, which occurred immediately after the Group achieved BS25999 certification, the business that had obtained the certification was also affected by the disaster. However, we managed to achieve an early recovery without any major disruptions, partly attributable to prior drills and training. This confirmed our understanding of the importance of the BCM activities.

Since the Great East Japan Earthquake, awareness of risks such as major earthquakes has been improving within the Group, and the PDCA is being followed in a solid manner in our BCM activities. On the other hand, there is increasingly strong demand from customers for higher levels of business continuity by the Group.
The Group also faces diverse risks, reflecting the expansion of its business on a global scale. A response to specific risks is also needed overseas, as seen in the flooding in Thailand two years ago, in which the Group also suffered damage.

Under these circumstances, the Group decided to acquire ISO22301 certification upon its official introduction as an international standard for BCMS last year. We launched initiatives to reevaluate any vulnerability in the Group's supply chain management and rebuild the supply chain in light of the standard by using the standard positively as a tool to respond to customers' needs from a global perspective. 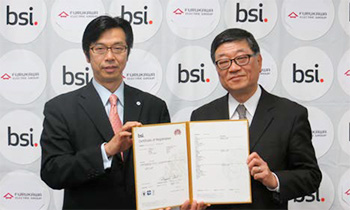 The Group will strive to enhance its corporate value through BCM activities by expanding the range of business lines subject to certification as a corporate group providing products that are safe to use.

(note 1)BSI Group Japan K.K.
Formed in 1901 with the support of the Department of Trade and Industry in Britain, the British Standards Institution (BSI) is the oldest national standards-making body in the world. BSI Group Japan K.K. is a Japanese corporation affiliated with the BSI.