Furukawa Electric commercialized the world’s first single cell with fully automatic analysis and retrieve equipment using a microchip developed from a industry-university collaboration of ASONE Corporation and the research group of Nagoya University Professor Syunichi Kuroda, Kobe University Professor Akihiko Kondo and Osaka Prefecture University professor Ikuo Fujii and others, and was awarded The Ministry of Economy, Trade and Industry’s award(note 1) in the products and technology development category of The 5th Monodzukuri Nippon Grand Award.

This equipment is expected to contribute to regenerative medical techniques using iPS cells and stem cells and quick completion of the screening of innovative new drug development. As a consequence, the “Scientific reports”, the sister magazine of the highest authority in the world British science journal “Nature” published the paper for this equipment to be acknowledged(note 2).

The world wide direct market size of the single cell with fully automatic analysis and retrieve equipment is expected to be 5 billion yen in 2015, and the market can be much larger in consideration of the domestic indirect economic spin-off effects for a wide range of basic research in life science and drug developments of clinical practical applications.

Furukawa Electric has already commercialized the cell sorter with the least sorting damage to living cells, thus, we will aggressively develop not only the bio-device business but also the wide range of the life science business utilizing the excellence in the nano-biotechnology.

Currently, this equipment is in domestic sales by ASONE Corporation which is the domestic largest physics and chemistry equipment seller.

Background of the development

The cell sorter(note 3) has been often used to analyze and retrieve the single cell. But problems were pointed out that the cell sorter could not carry out time-laps analysis(note 4) and damage less retrieve was impossible for the rare, such as several ten thousandths, and delicate live cells. Also, there were domestic and foreign attempts to efficiently analyze and retrieve single cells on the microchip. But the single cell retrieving accuracy was a technical bottle neck as a few micrometers of positioning accuracy was required between the microchip and a retrieving capillary(note 5). There is a commercial product which can retrieve, to some extent, the cell mass, but can not handle the single cell with a high sensitivity, a high efficiency and a high accuracy.

Furukawa Electric successfully achieved very high retrieve rate of around 90% even at the single cell of a few micrometers, for the first time in the world, by fully using its own image processing technology and its own mechatronics technology. For example, by using the developed single cell with fully automatic analysis and retrieve equipment in the establishment process of the iPS cells or the ES cells, it becomes possible to precisely pick out a cell having the best character from the library in one cell unit and to breed efficiently in a short time based on the exact genetic information analysis.

As a result, a large contribution can be expected to improve in the reliability and safety assessment of the iPS cells and stem cells used in the regenerative medicine. And significant efficiency is expected by detecting cells that secrete a large amount of good quality biotechnology-based pharmaceuticals (such as antibodies), at several thousand times higher sensitivity compared to conventional cell mass. In addition there is a large advantage; the developed drug screening that was required more than few years can be shortened to several weeks by using this equipment and the peptide library yeast surface display(note 6). Thus, this equipment can be applied as an innovative technology for a wide range of developed drugs screening. And it is expected that drugs development success rate, called the “three in ten thousand”, is improved.

Further more, in the clinical discipline; by using time-laps, the drug sensitivity analysis evaluation and the genetic analysis to single cells can be performed, so expectations of clinical practice is increasing for its contribution especially to guidelines of the anti-cancer drug administration.

Feature of the product

The single cell with fully automatic analysis and retrieve equipment is the world’s first equipment that can retrieve damage less single cell of interest on a culture plate, while measuring with an extremely high sensitivity the high density of the single cells on the microchip which configures more than 80 thousand to 330 thousand of micro well(note 7), depends on the cell size.

This equipment, in addition to the transmitted light analysis information, measurement and the analysis of 8000 or more cells only in 6 seconds by the three fluorescent colors is available. And a reagent replacement function for the time-laps analysis is included. 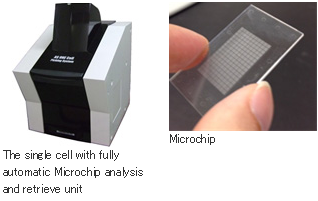 (Note 1)The 5th Monodzukuri Nippon Grand Award The Minister of Economy, Trade and Industry’s Award
Published in the URL :
http://www.meti.go.jp/english/press/2013/0913_03.html

(Note 3)Cell sorter
Measuring the characteristics of individual cells flowing at a high speed in narrow passages, and retrieve the cells of interest based on the information.

(Note 4)Time-laps analysis
Continuous measuring and analyzing of the cells, depending on the duration of time.

(Note 5)Capillary
Glass made small tube of around ten and several micrometer.

(Note 6)Peptide library yeast surface display
If more than one signal is obtained with a peptide on the surface of the yeast cells, from the peptide library to be made by a random combination of amino acid, it is a candidate for drug. It is a yeast cell to fulfill its “presentation” function.