Furukawa Electric Advisor, Hiroshi Ishihara (former President) was recently awarded the Maejima Hisoka Award by the Tsushinbunka Association. The award recognizes outstanding achievements in the development and advancement of telecommunications and broadcasting. 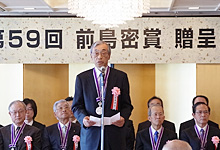 What is the Maejima Hisoka Award?

The Maejima Hisoka Award was established in 1955 to commemorate Maejima Hisoka, the founder of Japan's postal service, which brought unprecedented convenience to the lives of Japanese people in building a modern state, and to pass on and develop Maejima Hisoka's spirit.

The award is presented to people recognized to have outstanding achievements in each of the following telecommunications and broadcasting categories.