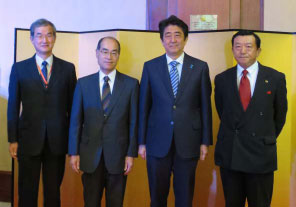 Masao Yoshida, Chairman of Furukawa Electric, participated in the Central and South American Economic Mission held in the Central and South America Tour of Japanese Government Leaders and delivered a speech -as one of the companies contributing to the Brazilian economy for many years- -on the Japan-Brazil Business Forum- sponsored by the Japan External Trade Organization (JETRO), Nikkei Inc., and Valor Economico. On the day of the speech, there was an active informational exchange on the outlook and expectations for business in both Brazil and Japan, in addition to the commemorative speech by Prime Minister Abe.

During his speech, Mr. Yoshida expressed that, "The importance of electric and communications infrastructure increases along with the economic growth of Brazil. Going forward, we at Furukawa Electric will continue to solve problems and contribute to economic growth in Brazil based on the variety of technologies that we have cultivated up to now."