This development is being carried out in cooperation with Kubotek Corporation, Mirapro Co., Ltd. and the Public Enterprise Bureau of Yamanashi Prefecture, as part of the project for the “Development of Technology for Safe, Low-cost, Large-size Battery Systems” being promoted by the New Energy and Industrial Technology Development Organization.

Details of the development

A flywheel power storage system stores energy by using surplus power from solar voltaic power generation or other sources to rotate a large disk (the flywheel) contained inside the machinery. When the amount of power generated decreases due to cloudy weather, the system then generates power to compensate for the amount of that decrease. It can be used as a “battery” that does not deteriorate and has a wide range of applications, including being useful for the effective use of electric power in railway systems (measure for regeneration cancellation). 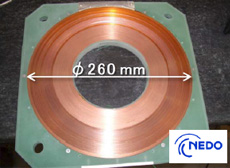 In order to lift such a large weight as this, it is necessary to generate a high magnetic field on a high-strength superconducting magnet. Furthermore, for efficient operation, it is necessary to raise the cooling temperature. For these reasons, we chose the “armor” coil(note 3) structure developed by Chubu Electric Power Co., Inc. for the coil to be used in the superconducting magnet in this development. This is a double-pancake coil (a flat coil made from a pair of windings of superconducting wire shaped like tape) with an internal diameter of 120mm and an external diameter of 260mm. We also chose the second generation high-temperature superconducting wires from SuperPower Inc., which Furukawa Electric purchased in 2012.

The coil that was produced was maintained at 51K (minus 222°C) by cooling using a compact refrigerator and heat conduction, without using liquid nitrogen. The electrification and magnetic field were confirmed at the operating current of 110A and we also succeeded in electrification at 163A, which is the performance limit for the wiring. In addition, we implemented testing of the combination with the superconducting bulk material and confirmed that the expected levitation force exceeding 2 tons was being created and that there were no problems related to the strength. The first generation high-temperature superconducting wires used previously needed to be cooled to below 20K (minus 253°C) in order to generate a high magnetic field. However, the second generation high-temperature superconducting wires can be operated at 50K (minus 223°C), so it is possible to expect reductions in cooling costs. From now onwards, we will add further coils and implement levitation testing on real scale flywheels.

It is planned that this magnet will be integrated into the large capacity superconducting flywheel power storage system being developed from fiscal 2012 to fiscal 2014 and that interconnection testing will start from 2015 at the megawatt-class solar power system to be newly constructed at Komekurayama in Yamanashi Prefecture.(note 4) 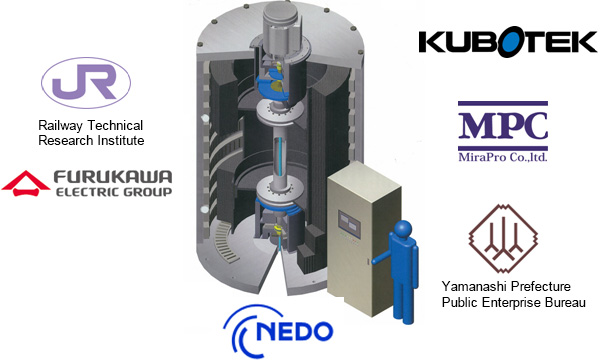 (note 1)Superconducting flywheel power storage system
A flywheel is a machine that converts electrical energy into kinetic energy on a high speed rotating body to store that energy. It is a machine that can input and output the electric power at high speed and also repetitively. In conventional systems, the mechanical bearing losses on the rotating body were large and also the wear on the bearings meant that long-term operation was difficult. However, by using superconducting magnets and superconducting bulk, it became possible to produce bearings that levitate the rotating body without contact and an electrical power storage system was realized that has low losses and does not require maintenance.

(note 4)Yamanashi Prefecture Komekurayama mega solar power plant
Yamanashi Prefecture has one of the greatest amounts of solar radiation in Japan and the prefecture jointly constructed the “Komekurayama Solar Power Station” with Tokyo Electric Power Company in Kofu City in Yamanashi Prefecture, as the core part of its global warming measures execution plan. Around 80,000 solar panels have been installed on high ground in a vast area covering 44.7ha. It generates 1,200kWh per year, which is equivalent to the power used by 3,400 ordinary households. Yamanashi Prefecture is currently constructing a 1,000kW photovoltaic power plant for use in a grid connection test in combination with a superconducting flywheel. It is planned that the collection of basic data for demonstration testing will began after the plant starts operating.