Furukawa Electric Co., Ltd. has received an order from the Japan Atomic Energy Agency for some 30 tons of superconducting cables to be used in the International Thermonuclear Experimental Reactor (ITER) that is currently under construction in France.

The ITER is an international megaproject designed to demonstrate the technical and scientific establishment of fusion energy through seven member entities: Japan, the European Union (EU), Russia, United States, Korea, China, and India.

In this way, the superconducting cables are twisted by Furukawa Electric Group Company, Furukawa Electric Industrial Cable Co., Ltd (headquarters: Arakawa, Tokyo; President: Yoshitaka Hattori), and VISCAS Corporation (headquarters: Shinagawa, Tokyo; President: Susumu Sakuma). Although the process is long and complex-from raw materials to twisting the cables, and with the continued impact of the damage from the snow-the collective strength that the Group has shown has led to orders. 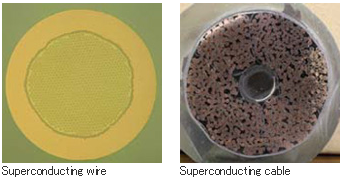 (Note 2)Class 1 Oxygen Free Copper:
Oxygen free copper is used in electron tubes such as transceiver vacuum tubes, microwave tubes, and the like. Oxygen free copper is especially needed for items which high electric field is applied to and which are used in an ultra-high vacuum. The crystal grains size of the oxygen copper is strictly regulated and the oxygen content is specified less than 10 parts per million (ppm).

(Note 3)Residual Resistance Ratio (RRR):
RRR is material property and calculated from following formula: resistivity at room temperature divided by the very low temperature at 4.2 K. A high RRR (low residual resistance) is needed in the stabilizing material for superconducting.

(Note 4)Critical Current Density (Jc):
This is the current density limit (maximum current density) where superconductivity flows without fail under a constant temperature and magnetic field. For Nb3Sn wire, this is defined as the current value per unit area for the portions other than the stabilized copper.

(Note 5)Current Sharing Temperature (Tcs):
This is the temperature limit (maximum temperature) for rated current to flow under a constant magnetic field. Because heat is generated in the conductor itself in addition to the heat inflow from outside in a superconducting conductor, an ample Tcs margin is needed as a design temperature for stable operation.