Recently, increased communication traffic and the worldwide need for optical fiber cables have both continued to transition at a high level. As growth in China—which has until now propelled the market—slows, demand is expected to increase in both emerging nations (such as in the Middle East, Africa, India, Southeast Asia, and South America) and in developed nations including the United States of America and those in Europe.

After establishing its Columbian base in August of last year, Furukawa Electric Group doubled the optical fiber cable production capability of OFS Russia (Voronezh), and held an opening ceremony in March of this year. In order to respond to increasing demand in EMEA (Europe, Middle East, Africa) regions, Furukawa Electric Group has begun preparing to establish a new production base in Africa.

Furukawa Electric Group has also launched a series of measures to improve its international competitiveness in the optical fiber industry. Improved production processes at its Mie Works (Kameyama, Mie) location have increased capability by 20%, and production process improvements at US OFS (Georgia) are underway. Furukawa Electric Group will continue efforts toward realizing cutting-edge optical fiber plants that offer high productivity and can withstand fluctuations in demand; for example, it will double production capability by enhancing production line at India BFFO (Goa). 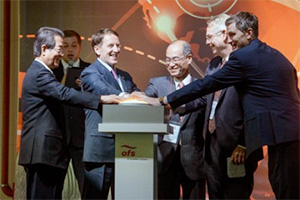