Furukawa Electric Co., Ltd. has been awarded the 2015 FY President's Award and has received a certificate of commendation from the Japan Industrial Safety & Health Association.

Based on its philosophy of "Safety First(Note 1)," the entire Furukawa Electric Group was highly praised for its efforts over many years to promote safety and health activities, and for its remarkable results that serve as examples for other companies.

The Japan Industrial Safety & Health Association (JISHA) is a special privately-owned corporation, founded in 1964 with the goal of improving safety and health and eliminating industrial accidents, through promoting the independent activities of business owners to prevent such accidents. JISHA has established a variety of commendation systems for those who have made significant contributions to health and safety activities and the like in the industrial field.

JISHA also awards companies who have particularly striven to promote industrial safety and health, have achieved remarkable results, and that have made significant achievements in spreading awareness throughout their region or the industry. The JISHA President's Award is given in recognition of these contributions.

In receiving this award, Furukawa Electric was praised for its efforts to promote the health and safety activities of the entire Group and achieving significant results that would serve as examples to other companies, through striving to improve the level of health and safety over many years and establishing a Health & Safety Committee throughout the entire Group—based on its philosophy of "Safety First." 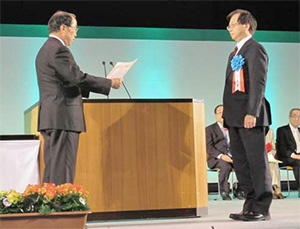 Furukawa Electric formed the "Furukawa Electric Group Health & Safety Committee" with the president serving as committee chairman. The committee discusses, sets, and follows up on health and safety policies for the entire Group, and works toward eliminating industrial accidents.

With realizing "fundamental safety," becoming a "safety conscious person," and “improving the level of safety administration” as its foundations, the committee holds danger experience training at the "Safety Dojo" and small group presentations held by safety personnel on such topics as following up on accidents and health and safety. The committee also trains managers as safety conscious personnel and checks the safety administration level of the group. The committee also creates and distributes major accident case studies to keep employees aware of past accidents, and improvement cases to spread policies throughout the group. Such activities have helped to improve the rate of lost-worktime injuries(Note 2) for three straight years at Furukawa Eectric.

(note 1)Safety First:
Mr. Masayuki Odagawa, manager of the Furukawa Kogyo Ashio Mining Office (now, the Furukawa Co., Ltd. Ashio Office), took the concept of "Safety First" that was being espoused in the United States at the time, and translated it into Japanese as "Anzen Senichi" in 1912. Enamel signs in the shape of a red oval representing the concept of "Safety First" were placed inside and outside of mines to inspire workers, marking the first safety activity in Japanese workplaces throughout our entire industry. (Reference: Looking back on 100 Years of Industrial Safety Work. JISHA website.)

(note 2)Rate of lost-worktime injuries:
An indicator that represents the frequency at which accidents occur. It is represented as the number of accident victims per 1,000,000 working hours.