In collaboration with the Osaka Prefectural Institute of Public Health(note 1) (Director: Yoshimasa Yamamoto; located in Higashinari-ku, Osaka and hereafter referred to as the “Prefectural Public Health Institute”), Furukawa Electric Co., Ltd. has succeeded in the development of a new test agent for Campylobacter, a bacteria that can cause bacterial food poisoning. With the development of this agent, the time required to test for food poisoning bacteria at production and distribution worksites can be greatly reduced, and this achievement will be a valuable contribution to the safe and secure provision of fresh food.

Food poisoning caused by Campylobacter is responsible for the highest number of bacterial food poisoning cases in Japan. The primary source of infection for this type of food poisoning is the contamination of chicken meat by the intestinal contents of poultry carrying the Campylobacter bacteria, which can occur during work procedures at meat processing plants.

Currently, Campylobacter testing is mainly conducted using a “bacterial cultivation method”. However, performing bacterial cultivation requires an extremely long period of several days, and so “colored immunochromatographic test agents” using gold nanoparticles have been developed as a faster testing method. While these colored immunochromatographic test agents can detect Campylobacter in quantities of roughly 105 - 106 units, their detection sensitivity is still considered insufficient compared to the bacterial cultivation method, and since there is a possibility of positive specimens being overlooked, a higher level of sensitivity has been needed.

This newly-developed fluorescent immunochromatographic test agent can drastically reduce the Campylobacter testing time of several days required by the bacterial cultivation method. Furthermore, since its detection sensitivity is over 50 times higher than that of colored immunochromatographic test agents that use gold nanoparticles, there are high expectations for its future application in Campylobacter testing of food and meat products in general.

The developed product takes the same device form as an ordinary immunochromatography testing kit, consisting of Quartz Dot and a test strip. To perform a test, a subject liquid (enrichment culture fluid, etc.) and Quartz Dot are mixed, the mixed liquid is delivered by drops at the edge of the test strip, and the fluorescent emission generated on the test strip is then measured using a compact, lightweight fluorescence measuring instrument to provide a quantitative judgment on the detection results.

In the development of this product, the overall system was optimized through the use of the fluorescent immunochromatographic reader DiaScanα, developed by Otsuka Electronics Co., Ltd. 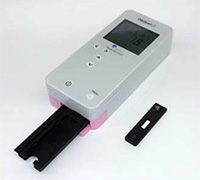 (note 1)Osaka Prefectural Institute of Public Health
A public institution executing a variety of tests and examinations and providing related instructions, in the interest of maintaining public health. With the goal of investigating ways to reduce the testing time that is a prominent issue in conventional Campylobacter testing, the Prefectural Public Health Institute and Furukawa Electric focused attention on Furukawa Electric’s fluorescent immunochromatographic technology with its characteristically high sensitivity, and proceeded with the joint development of a fluorescent immunochromatographic test agent for the Campylobacter bacteria, which has, particularly in recent years, been the cause of a growing number of food poisoning cases.

(note 2)Quartz Dot
Quartz Dot is a fluorescent silica nanoparticle containing a high concentration of organic dye molecules, boasting (1) higher brightness than old fluorescent reagents, (2) no harmful effects on the human body, and (3) high hydrophilic properties and high compatibility with biological molecules. In particular, by anchoring the fluorescent dye to the silica skeleton, leakage of dye from the interior of the particle can be suppressed, achieving fluorescent properties that can last for long periods of time.