The Railway Technical Research Institute (RTRI) has been developing a superconducting flywheel power storage system, as a next-generation power storage system, jointly with Kubotek Corporation, Furukawa Electric Co., Ltd., Mirapro Co., Ltd. and the Public Enterprise Bureau of Yamanashi Prefecture. This development has been supported by the New Energy and Industrial Technology Development Organization as a one of the projects for “the Technical Development for Safe, Low-Cost, Large-Capacity Battery Systems.” 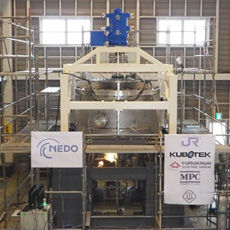 The flywheel power storage system is capable of storing electricity in the form of kinetic energy by rotating a flywheel, and converting the rotating power again to electricity, if necessary. Since this rechargeable battery does not deteriorate over time, it can be used for many purposes. For example, being combined with rather unstable power-generation systems such as photovoltaic or wind-power generation, it can help stabilize power supplies. It is also possible to apply this system to railways in order to prevent regenerative cancellation. For this system, RTRI developed a superconducting magnetic bearing composed of a high-temperature superconducting coil and high-temperature superconducting bulk. In this system, the flywheel is levitated by the superconducting magnetic bearing without contact. Therefore, the power loss is minimal although a large flywheel is used, and it is a very practical system which enables stable power generation over a long period.

The details of this technical development will be presented at the 91st Cryogenic and Superconducting Engineering Technical Meeting scheduled on May 27, 2015. Grid-connection tests with a megawatt-class solar power plant will also be started this summer at Komekurayama in Yamanashi Prefecture.

This system has been developed jointly with Kubotek Corporation, Furukawa Electric Co., Ltd., Mirapro Co., Ltd., and the Public Enterprise Bureau of Yamanashi Prefecture, in a project known as “the Technical Development for Safe, Low-Cost, Large-Capacity Battery System - the Development of the Next-Generation Flywheel Power Storage System” sponsored by the New Energy and Industrial Technology Development Organization (NEDO).

Details of the system

The larger and heavier the flywheel is, and the faster it rotates, the larger the amount of energy the power-storage system can store. In this “superconducting flywheel power-storage system,” the following technical developments have enabled a large-diameter, heavy-weight flywheel to rotate with higher speeds and less power loss.

(1) Large-sized CFRP flywheel
For CFRP (carbon fiber-reinforced plastic) flywheels which have been developed so far, have a 1-meter diameter has been the upper limit due to restriction in strength and cost. For this system, however, higher strength and reliability were attained by a better method of weaving carbon fiber and a 2-meter-diameter flywheel was developed. This flywheel is made by stacking nine layers of CFRP rotors with a 2-meter outer diameter, 1.4-meter inner diameter and 10-centimeter thickness. With this method, flywheels of different storage capacities can be made by changing the number of layers. 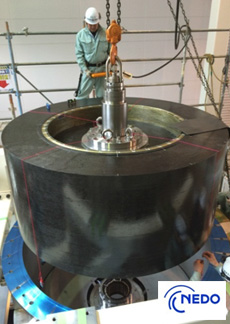 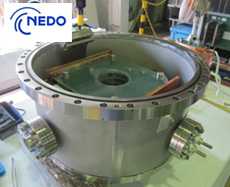 The completed system is the world's largest-class flywheel power storage system which has 300-kW output capability and 100-kWh storage capacity by rotating the flywheel which is 2 meters in diameter and weighs 4 tons.

Basic performance of this machine will be tested and adjusted in confirmation tests and moved to a megawatt-class solar power plant at Komekurayama in Yamanashi Prefecture. There, it will be connected to the solar power system and the power grid of Tokyo Electric Power Company, and confirmation testing will be started to help stabilize fluctuating supply of renewable energy.

Outline of the entire system