Furukawa Electric Co., Ltd. has successfully developed a new heat pipe1 that is optima(note 1) for the power inverters (also called inverters) used in hybrid cars and high-speed trains and for the heat radiation and storing devices in lithium-ion batteries. The heat pipe, regardless of its positioning, increases thermal transfer beyond what was previously possible and in doing so helps deal with heating in various types of vehicles.

Recent years have seen the increased popularity of next-generation automobiles like hybrid and electric cars, as well as the expansion of high-speed railways abroad. In order to maximize the efficiency of their inverters and lithium-ion batteries, these cars and trains need methods to store and radiate large amounts of heat. Previous models had problems with storing heat especially when going uphill in so-called “top heat mode.” In this mode heat is generated above the cooling area, and thus the hydraulic fluid must go against the force of gravity to reach the heat pipe.

Furukawa Electric has developed a heat radiation device for inverters used in cars and a new heat pipe that is ideal for storing heat in lithium-ion batteries. The new heat pipe utilizes technology developed over the course of many years for a small heat pipe to be used in electronics. By changing the wick(note 2) of the heat pipe to a type using sintered metal powder, its functionality has been greatly improved, especially during top heat mode. This new heat pipe also performs much better than older models when activated from a cold state, and thus it is expected to be used even in colder regions where it used to be difficult. 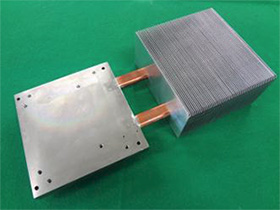 (note 1)Heat pipe
A metal pipe sealed at both ends that contains a wick structure, which exerts capillary action, and a working fluid that is in liquid or gas form at room temperature. Even a small change in temperature makes it possible to transfer large amounts of heat without supplying any outside power.

The details of this technological breakthrough will be presented at the “National Heat Transfer Symposium of Japan,” held on June 3, 2015.