In addition to being highly rated on "success" (based on the rate of patent registration) again this year, Furukawa Electric was also evaluated this time as having further improved its "globalization" in terms of the fine balance of patents obtained in China, the US, Europe, and Japan.

Since 2011, Thomson Reuters analyzes global patent trends based on its own patent data, selects the top 100 companies and organizations, and awards them with the "Top 100 Global Innovators" award. Companies and organizations are generally selected for this award based on four evaluation axes: "volume (the number of patents)," "success (the number of registrations)," "globalization," and "influence (how often they are cited)." 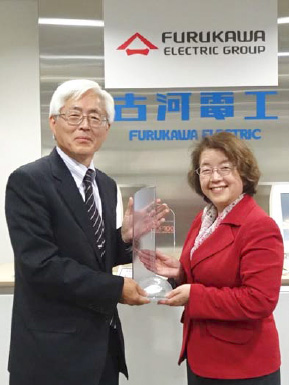