Furukawa Electric apologizes to its customers for the inconvenience. Going forward, Furukawa Electric plans to reach stable operation quickly as it continues to grow as a “manufacturer that meets its responsibilities as a partner.”

A portion of the plant ceiling at Furukawa Electric Nikko Works had collapsed due to record snowfall in Nikko-shi, Tochigi Prefecture during February 2014, halting the integrated production of superconducting products. Lightly damaged facilities were repaired, but some facilities required replacement and Furukawa Electric worked hard to resume integrated production as quickly as possible.

Beginning at the end of May, test runs were conducted and adjustments were made for superconducting manufacturing equipment that had showed progress during repairs. Integrated production for the same products resumed on June 22.

In addition to NbTi wire for medical devices and Nb3Sn wire for analysis equipment, Furukawa Electric will utilize the strength of its project products (such as wire for international thermonuclear experimental reactors [ITER]) and original products (such as R&W [react-and-wind] Nb3Sn wire), and will make use of hydroelectric power generation to resume integrated production that is environmentally-responsible.

Outside view of the new plant

With the operation of the new superconducting plant, the snow damage at the Furukawa Electric Nikko Works has now been repaired. Furukawa Electric will continue to carry on the DNA of Ichibe Furukawa, cherish the cause of “making the world brighter,” and contribute in a wide variety of fields by resuming the same production capability as before the disaster. 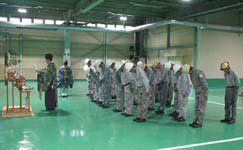 Ceremony praying for safety at the new plant