As international economic sanctions placed on the Republic of the Union of Myanmar have eased since the nation transitioned from military rule to democratic government in 2010, there are an increasing number of investment opportunities for other countries, and Myanmar is expected to undergo further economic growth. This is especially true for rapid improvements to infrastructures of all kinds, which form the basis of economic growth.

FSSM received its business license in December 2015, with the goal of focusing on engineering work for telecommunications infrastructure construction within Myanmar. A grand opening ceremony for the company was held in Yangon, Myanmar on May 19.

The ceremony was attended by Tateshi Higuchi (Ambassador Extraordinary and Plenipotentiary of Japan to the Republic of the Union of Myanmar), the President of the Japan Chamber of Commerce and Industry in Myanmar, and a variety of figures from Japanese companies and companies in Myanmar.

Masao Yoshida, Chairman of the Board of Furukawa Electric, stated, "I am truly honored today to celebrate the grand opening of FSSM, the first Myanmar base in the Furukawa Electric Group. I hope that our advanced engineering technological strength and rapid service will help to bring the economy and society of the Republic of the Union of Myanmar to the next level." 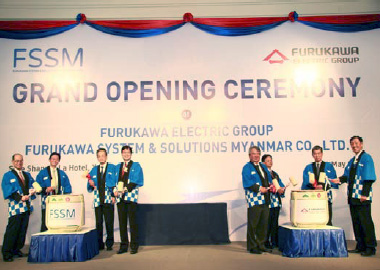 Tateshi Higuchi, Ambassador Extraordinary and Plenipotentiary of Japan to the Republic of the Union of Myanmar (third from the left)
Masao Yoshida, Chairman of the Board of Furukawa Electric (far left); Tsuyoshi Kuwayama, President of FSSM (far right)

Tsuyoshi Kuwayama, President of FSSM, laid out his vision to those in attendance, stating, "When people hear 'Furukawa Electric' they may think that our main business involves supplying cables and similar products. However, our main business actually involves providing technical services such as telecommunications-related design, construction, and maintenance. I am confident that we will be able to support the business activities of everyone gathered here today."