The award ceremony will be held this year on Friday, November 18 in Oita Oasis Tower Hotel.

Smart Community Light is a street lamp for night-time illumination, which combines a lead storage battery and LED light in a single photovoltaic system. It does not require a constant supply of power, so it can help to curb installation expenses and will not be affected by power outages caused by natural disasters or the like.

The LED light section automatically lights up after sunset and provides the same brightness as the 20 W straight tube fluorescent lamps used in standard crime prevention lamps, while the bow-shaped display section can be used to post a variety of information.

This fiscal year, the product is given power supply functionality (AC100 V/USB output) that can be used during an emergency, in addition to its use as a display and light for disaster shelters. It also features functionality to charge cellphones during a power outage, allowing radios and other devices to be used. 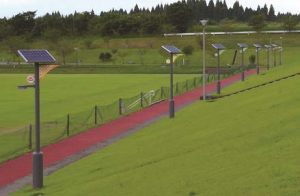