Furukawa Electric Co., Ltd. has completed development of HYC500, the world's top class new standard heatsink that is capable of dissipating heat from COB LEDs for 500W illumination. It is the only standard heatsink compatible with the new Citizen Electronics CLU550 COB series product.

LED illumination that uses light-emitting diodes (LED) continues to rapidly grow popular due to the long operating lives and low power consumption of the technology. Although light from LED light sources contains very little heat, most of the applied power is converted to heat generated from the LED elements. It is therefore necessary to implement comprehensive measures to dissipate heat for high power LED illumination exceeding several hundred watts, such as floodlights used in sports fields and stadiums.

Furukawa Electric has completed development of HYC500, the world's top class new standard heatsink that is capable of dissipating heat from COB LEDs for 500W illumination. 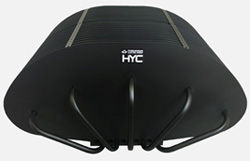 Furukawa Electric will conduct lighting demonstrations for this product during the Lighting Japan "8th Light-Tech Expo" to be held from January 13th this year at Tokyo Big Sight. Furukawa Electric can be found in E36-18 in the East Hall. In addition to HYC500, other as of yet unreleased 30 W to 300 W products will be exhibited for viewing.

A site dedicated to HYC has been added to the Furukawa Electric thermal products website on January 12th of this year. In addition to providing detailed information such as product features and datasheets, Furukawa Electric plans to also offer the latest product information by email to those who register at the site.