A collaborative project between Furukawa Electric and the Tokai University School of Medicine has succeeded in the development of an antibody test reagent for amoebiasis. This development realizes amoebiasis detection with far greater speed, simplicity and sensitivity and will help reduce the burden on medical institutions that introduce the inspection.

Amoebiasis is one of the most significant parasitic diseases that occur in Japan and there are more than 1,000 cases reported as a Type V infection each year. There are also many cases when the direct detection of the organism body is difficult and it is necessary to differentiate it from other species.

In order to make a definite diagnosis, it is effective to detect serum antibodies and fecal antigens. However, the methods that can be used at present are limited, so there were demands for the establishment of a highly sensitive inspection method that could be implemented quickly and simply.

Furukawa Electric has collaborated with Professor Hiroshi Tachibana of the Tokai University School of Medicine and succeeded in the development of a “fluorescent immunochromatographic test drug” that is a simple and rapid antibody test reagent. The reagent was developed by applying the fluorescent silica nanoparticle (hereinafter called “Quartz Dot®”) technology developed by Furukawa Electric to the detection of amoebiasis.

Inspections previously took between 3 hours and several days, but this newly developed “fluorescent immunochromatographic test drug” greatly reduces the time required for the inspection to around 10 to 20 minutes. Furthermore, we were able to realize a high sensitivity that is equivalent to or greater than that of the existing inspection methods.

The item developed has a similar device form to that of general immunochromatographic testing kits composed of the Quartz Dot® and a test strip. For the inspection, the liquid to be tested (blood serum) and the Quartz Dots® are mixed and then the mixed liquid is dripped onto the end of the test strip. A compact and lightweight fluorophotometer then measures the fluorescence emission generated on the test strip to quantitatively judge whether or not there has been detection.

In this development, we optimized the system overall by using the Fluorescent Immunochromato Reader DiaScan α developed by Otsuka Electronics Co., Ltd. 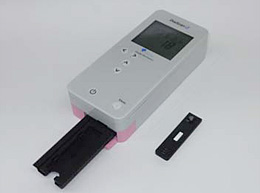 The successful results obtained will be jointly presented with Tokai University at the 85th Annual Meeting of the Japanese Society of Parasitology that will be held from March 19th this year (at the Miyazaki Citizen’s Plaza).

(note 1)Fluorescent silica nanoparticle (Quartz Dot):
Quartz Dot is a fluorescent silica nanoparticle containing a high concentration of organic dye molecules. Its characteristics are: (1) Higher brightness than previous fluorescent reagents, (2) No harmful effects on the human body, and (3) Highly hydrophilic properties and high compatibility with biomolecules. In particular, the anchoring of the fluorescent dye to the silica skeleton has made it possible to suppress the outflow of the dye from the interior of the particle and this realizes fluorescent properties that last for a long period of time.
Furthermore, the chemical bonding of biomolecules to the surface of the particles realizes excellent preservation stability as a reagent and there are expectations for the use of this technology in the future for medical and other applications in the life science sector.

(note 2)Amoebiasis (Taken from Ministry of Health, Labour and Welfare website):
This is an infectious disease of the gastrointestinal tract that is found around the world. Approximately 100,000 people around the world die from this infection every year. It is an infection that is often seen in travelers, but in Japan there are more infections seen in mass infections at welfare facilities, between homosexual males, and these infections are tending to increase.
The infection is spread by the consumption of uncooked vegetables, fruits, meat, water or ice contaminated with the Entamoeba histolytica from the feces of infected persons.