The FAS-developed perimeter monitoring radar utilizes the pulse method(note 1) to provide accurate recognition in a wide range of environments, and the angle measurement method(note 2) for increased data stability. Combined, both technologies deliver the world's most advanced detection and stability.

Recently, heightened awareness of vehicle safety has accelerated the pace at which sensors have developed for practical use. Vehicle safety technology is increasingly being applied toward preventing collisions and reducing the number of accidents. ADAS, one such technology that helps drivers to drive safely, is expected to play a role in the self-driving cars of the future.

Perimeter monitoring radars are capable of detecting obstacles toward the front and rear of a vehicle as well as in its blind spots—even in poor weather—and are effective in maintaining vehicle safety, so expectations are growing for these products as sensors. However, there were still many unresolved issues when it came to accurately detecting obstacles in a wide range of environments.

The signal transmission and high frequency technologies the Furukawa Electric Group has developed over many years in creating products such as high capacity optical communication equipment and dead zone countermeasure systems have been combined and applied toward developing this new perimeter monitoring radar. FAS plans to reach perimeter monitoring radar-related sales of 10 billion yen in the FY2020, by working to further improve detection performance and stability, and by proposing the use of the product in a variety of vehicle models. 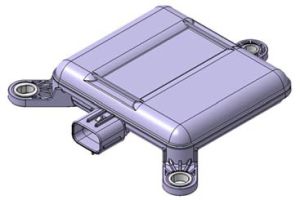 (note 1)Pulse method:
A method used to detect distance and relative velocity, in which pulse waves are transmitted and then returning waves are detected.

(note 2)Angle measurement method:
A method used to provide horizontal direction measurement functionality, in which measurement of a comparatively wide angular range at a high angular resolution capability is required. Some other methods include beam switching, phased array, digital beam forming, and monopulse.

Vehicle-mounted radars generally use the frequency modulated continuous wave (FMCW) method(note 3). However, the FAS product uses the pulse method to accurately and simultaneously detect vehicles, bicycles, pedestrians, and other obstacles. It also utilizes digital beam forming (in which the phase information from four beams is used to calculate the angle) as an angle measurement method to further improve data stability.

(note 3)Frequency modulated continuous wave (FMCW) method:
A method in which frequency modulated (FM) continuous waves (CW) (i.e. waves where the transmitted wave frequency varies periodically) are transmitted, and then waves reflected back from the target are received. The difference in the sent and received wave frequencies (beat frequency) is measured to determine distance.