Furukawa Electric Co., Ltd., in cooperation with East Japan Railway Company, has developed Flexible Trough, a cable trough made from recycled plastic that can be freely bent when installed. Flexible Trough will enter mass production during the first half of the 2017 FY. This newest addition to the GREEN TROUGH Series of cable trough products was designed to help deal with construction worker shortages and to reduce the amount of time required for construction.

Cable troughs are a type of protective pipe for cables that can be opened and closed. They are mostly installed along railway lines. Although concrete cable troughs are generally used for this purpose, such products require a great deal of effort when avoiding power poles and other existing structures, as workers need to haul in a concrete cutter, cut the trough itself, and then readjust the angle while filling in the gaps with mortar. Cutting these troughs is itself problematic due to the dust and noise that is generated.
In response, Furukawa Electric has taken the lead in developing the GREEN TROUGH Series of plastic cable troughs, which are made mainly from recycled (waste) plastic and are environmentally friendly. The products are used all over Japan—for applications such as railroads, highways and power plants—and are even widely used outside of Japan—such as along railroads in the UK. As the use of these products spreads across the globe, there is an increasing demand for a product that eliminates construction work required to avoid existing structures.

Furukawa Electric, in cooperation with East Japan Railway Company, is the first in Japan to successfully develop Flexible Trough, a cable trough made from recycled plastic that can be freely bent up to R800 mm when installed.
Through combining a proprietary fit structure with GREEN TROUGH recycle technology, Furukawa Electric has developed a cable trough that can avoid existing structures—without requiring the trough to be cut. Since the trough does not need to be cut, dust and noise are no longer an issue. Furukawa Electric has already decided to bring the product to market, and will begin mass production in the first half of 2017.
As the industry continues to face a construction worker shortage, Furukawa Electric is committed toward expanding the GREEN TROUGH Series and further reducing construction times required for trough work. 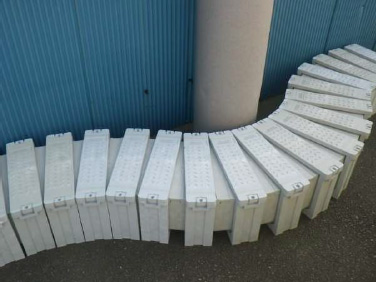