Keiichi Kobayashi, President of Furukawa Electric Co., Ltd., has endorsed the “Declaration on Action by a Group of Male Leaders Who Will Create a Society in which Women Shine”, an initiative backed by the Cabinet Office of Japan.
Based on the items indicated in this declaration, which consist of “Taking action and sending messages ourselves”, “Disrupting the status quo”, and “Developing networking”, our company will take action in coordination with the “IkuBoss Corporate Alliance”, which we became a member of on June 7 of this year, to raise the motivation of women and make it possible for them to utilize their abilities maximally.

Utilizing the opportunities provided by the “Kick Off Meeting for Supporting Women to Shine” held at the office of the Prime Minister on March 28, 2014, movements conducted by leaders in various fields to support women who will and do shine with outstanding ability have been spreading.
As part of these movements, a “Declaration on Action by a Group of Male Leaders Who Will Create a Society in which Women Shine”’ has been coordinated, made up of male leaders from companies working to actively promote the success of women. 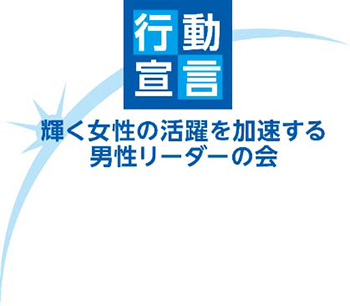 New logo of the "Declaration of Action"

Measures to promote the activity of women by Furukawa Electric Co., Ltd.

Since FY2005, our company has been continually involved in arranging excellent working conditions for women and in helping to promote their work-life balance. In order to accelerate the creation of workplace environments where diverse personnel can be active and successful, in 2014 we established a Diversity Promotion Section and began the “Furukawa ‘V’ Challenge!!”, a program to promote the success of women. Under coordination with our Work Style Reformation Project started in 2015, we are making great progress with measures such as “reformation of awareness of diversity promotion and inclusion”, “measures to promote the activity of women”, and “promotion of independent work-life management”. In April 2016, we became the first in the non-ferrous metals industry to acquire the 3rd level (highest evaluation) of the “Eruboshi” certification presented to outstanding companies, recognizing the implementation status and other elements of our initiatives to promote the activity of women.

http://positiveaction.mhlw.go.jp/declaration/add/search_detail/?id=2124 (Japanese)
*”Positive action” refers to voluntary and proactive initiatives undertaken by individual corporations with the goal of eliminating the discrepancies occurring between male and female workers, resulting from factors such as background situations which have existed since the past, or attitudes leading to the separation of the roles of men and women according to fixed ideas of gender.