NEDO, Thermal Management Materials and Technology Research Association (TherMAT), and Furukawa Electric Co. Ltd. have, in a world-first, developed a clathrate sintered body U-shaped element to realize thermoelectric generation in mid-high temperature range, and succeeded in generating electricity with a small flame like that of a candle.
Based on this development, we aim to realize a high-power thermoelectric generation module that converts unutilized thermal energy such as waste heat of industrial furnaces and automobile engines in the medium-high 200 to 800°C temperature range, into electric power, and for application in other areas such as the household sector.
The results will be exhibited at "2017 NEDO Energy Conservation Technology Forum" as part of "INCHEM TOKYO 2017" to be held from November 20 to 22 at Tokyo Big Sight, which will introduce the results of the latest energy conservation technology developments and efforts. 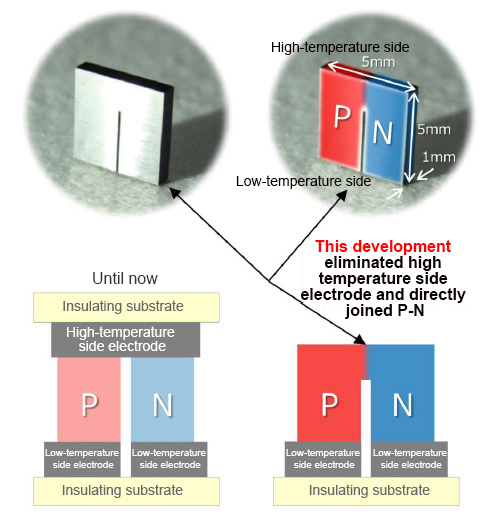 Currently, in the transportation, industry and household sectors, over half the primary energy goes unused and becomes waste heat. Against this backdrop, NEDO is focused on the enormous amount of unutilized heat that is emitted into the environment without being used, and since 2015 has been implementing a "Research and Development Project for Innovative Thermal Management Materials and Technologies"(note 1) that aims for the innovation of underlying technologies to make it possible to "Reduce, Recycle and Reuse" and to establish a system.
Now, in the NEDO project, Furukawa Electric Co., Ltd. (hereinafter, Furukawa Electric), a member of the Thermal Management Materials and Technology Research Association (hereafter, TherMAT), in a world first, have developed a high temperature electrodeless U-shaped element with integrated P-type and N-type sintered bodies(note 2) composed of environmentally-friendly silicon clathrate compounds(note 3) (Fig. 3). Based on this development, durability is improved for use on the high-temperature side of the element (right side of Figure 1), and we aim to realize a high-power thermoelectric generation module that converts unutilized thermal energy such as waste heat from industrial furnaces and automobile engines in the medium-high 200 to 800°C temperature range into electric power, and for application in other fields such as the household sector.
The results will be exhibited at "2017 NEDO Energy Conservation Technology Forum" as part of "INCHEM TOKYO 2017" to be held from November 20 to 22 at Tokyo Big Sight, which will introduce the results of the latest energy conservation technology developments and efforts. For details, please refer to the below URL.

2. Results of the development

Thermoelectric conversion technology is technology that can obtain electric power directly from waste heat via the solid-state Seebeck effect(note 4), and it is expected that it will contribute to energy conservation by effectively utilizing unused 200 to 800°C heat in the so-called medium-high temperature range such as waste heat from factories and automobile engines. However, materials with high thermoelectric performance in the medium-high temperature range are mostly composed of elements that are highly toxic, rare and low melting, such as lead, tellurium, antimony, selenium, and thallium. Thermoelectric exchanger materials composed of these elements have not been widely used because they require ingenuity for use in air.
The high-temperature electrode-less U-shaped element (Figure 1) integrated with P-type and N-type sintered bodies made of environmentally-friendly silicon clathrate compounds developed here is composed mainly of silicon, the most abundant element on earth, and since both the P-type and N-type are made of the same type of silicon clathrate compound, there is no great difference in value in their physical properties such as the coefficient of thermal expansion. Moreover, by eliminating the metal electrode on the high-temperature side and the insulating substrate from the conventional module, high temperature resistance has been attained. Holding this element over a flame such as a candle produces a voltage of 50 mV. Using 8 elements, we developed an 8-pair half-skeleton module in which the metal electrodes are arranged on the low-temperature side (right side in Figure 1) electrically in series and thermally in parallel, and in carrying out an experiment where the module was held over a candle flame (outer flame approx. 800°C), we succeeded in rotating a small motor (Figure 2 - refer to movie from QR code). From this it was found that electricity can be generated even in the absence of special auxiliary components for heat collection, dissipation, or atmospheric exposure.

In addition, the U-shaped element developed this time is specialized for a high-temperature region in the realm of exposure to direct flame, and it is expected to obtain power generation in micro-watt (μW) to kilo-watt (kW) levels by increasing the number of elements connected (Figure 3).

The technology developed here can be applied not only to automobile exhaust heat and industrial waste heat but also to other fields. We will consider further development for further energy saving. As an example, Figure 4 shows a proposed compact power generation system installed in a stove. In combination with a portable stove that is a recommended disaster preparedness stockpile item, it is also expected that the technology can be used as a means to charge small electronic devices such as smartphones. Further, based on this development, we aim to realize a high-power thermoelectric generation module that converts unutilized thermal energy such as exhaust heat from industrial furnaces and automobile engines in the medium-high 200 to 800°C temperature range into electric power.
In material development, we aim to establish technologies to suppress the rise in electrical resistivity due to nanostructures.
We will experimentally confirm the improvement of the properties of the new material by sintered body trial manufacture and measurement. In addition to better understanding the thermal cycle characteristics, we will also develop technologies to mount the sintered bodies at high density. 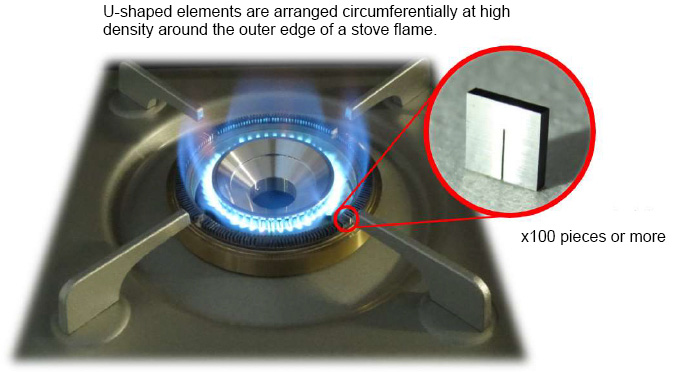 (note 1)Research and Development Project for Innovative Thermal Management Materials and Technologies
Under Project Leader Dr. Haruhiko Obara (National Institute of Advanced Industrial Science and Technology (AIST), Energy and Environment Research Strategy Department, Research Strategy Director), research and development of innovative technology is carried out from 2013-2022 (of which, 2013-2014 was carried out by the Ministry of Economy, Trade and Industry)

(note 3)Clathrate compounds
Intermetallic compounds having a cage-like crystal structure with the basic chemical formula Ba8Ga16Ge30. Cage-like polyhedral encapsulating elements are, by forming cubic crystals while sharing their planes, considered to have the most ideal crystal structure as thermoelectric exchanger materials. They are attracting attention as new high-performance materials that don’t contain toxic elements.