The conversion of copper wire W/H to aluminum has been gaining attention due to the need to lighten vehicles and the rising cost of copper resources.
Furukawa Automotive Systems was the first in the world to successfully develop “α Terminal Series” anti-corrosion terminals for aluminum wire W/H, which can be used with existing connector housings and that offer world-class anti-corrosion performance and lower anti-corrosion processing costs. Furukawa Automotive Systems plans to continue expanding its product lineup—for example, a total of 21 types of products are produced at its Mie Works location.

Furukawa Automotive Systems has jointly developed automatic cutting and crimping equipment for “α Terminal Series” together with a general cutting/crimping equipment manufacturer, and will begin selling the equipment in April of this year.
The new automatic cutting and crimping equipment was developed based on manufacturing systems that have been successfully used in Furukawa Automotive Systems W/H manufacturing sites. It incorporates operations to insert wires into tubular terminals (a core technology required for terminal crimping) and multilevel crimping operations performed with a digital crimper(note 1), and is equipped with sensors used to detect crimping loads and wire insertion amount—resulting in high quality cutting and crimping.
In addition to double-ended α terminals, the new equipment can also be used for high-speed double-ended simultaneous crimping of conventional open barrel terminalss(note 2) by switching the applicator. 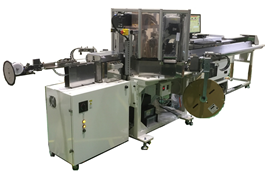 (note 2)Open barrel terminal: The main terminal used in the W/H industry, where the upper surface of the swaged portion of the terminal’s core is open.

Furukawa Automotive Systems will work toward accelerating the conversion of copper wire W/H to aluminum wire W/H, and help to create greener cars by selling this new automatic cutting and crimping equipment in locations such as Asia, Europe, and the US, and by promoting the spread of “α Terminal Series” throughout the world.